Get fresh music recommendations delivered to your inbox every Friday.
We've updated our Terms of Use. You can review the changes here.

No Singles: A 20 year Anniversary tribute to The Aquabats vs. The Floating Eye of Death 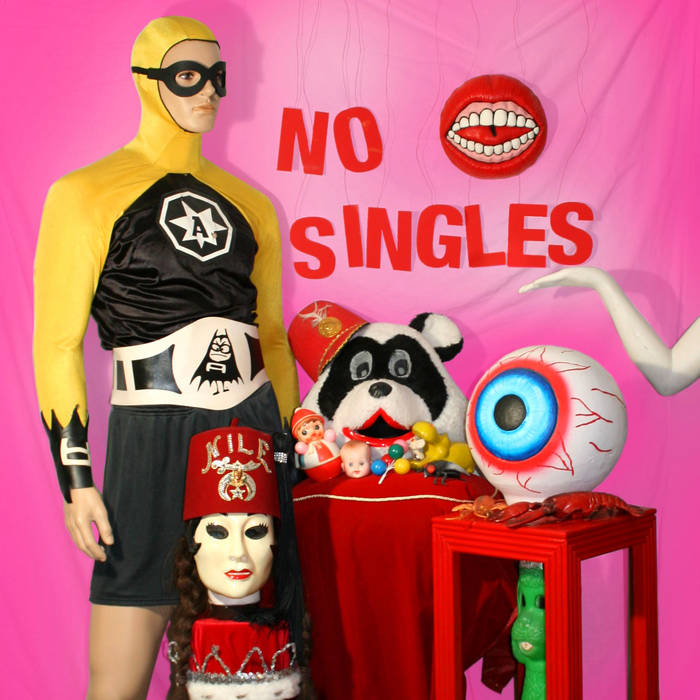 "The year was 1999, a very scary and confusing time for the world and The Aquabats. As the millennium laid upon us we knew we had a crucial message to share. A message of Truth, Love and Despair. At the time It had been two years since our last Record, all we knew was tour life. We had just come off the road, Ska was on the inevitable downward popularity spiral and most of us did not have a proper residence. The Bats were living out of garages, friends houses and old bedrooms from our childhood. We were broke and everything seemed like a total blur. The good thing was that we still had a record deal, Goldvoice was our rock. They had supported us since the beginning and Paul Tollett was our good friend and mentor. As we started writing and preparing for the recording, Paul had given us total trust and creative control. They fronted money for extensive pre-production, practice space and a small amount for living expenses. We had nothing to worry about right?

We realized early on in this stage that our new material was sounding nothing like the Fury record. The Goldenvoice guys were concerned upon hearing the demos and wanted us to consider spending money on a “real” producer. This wasn't a bad thing at first, we thought, “its ok all we need is a good producer to reel us in and focus the tunes a little bit”. Keep in mind the money a record company gives you is not yours, it's basically just a loan you pay back.

Enter Thom Wilson, producer of the Punk ethos, as so we thought... Thom’s repertoire included The Dead Kennedys, Adolescents, TSOL, Bad Religion, The Offspring, Social Distortion, The Vandals and many more including Seal and Crofts! What a range right? Well, It didn't take long in the recording process to realize something was amiss. The overall vibe in the room was off from the start, Thom didn't like our performances at all. His take on the process was that everything had to be recorded live and overdubs were not going to be welcomed very much. This was cool with us it just got very tedious to his ears. To us he was an old Hippie in a bad mood, not a good combo. I remember how much shit he gave Dr. Rock (our drummer Gabe Palmer) for playing hard and too much cymbol work. What!? We’re The Aquabats, that's what we are known for dude… Anyway after three or four studios and a couple long breaks we got through the record with him. Thom went back to his Yurt in Santa Cruz and mixed the record there by himself. When we got the first mix of the record, oh my god we were bummed. I remember it was like all vocals and no drums really. Christian (Bat Commander) was super concerned and so was Paul T. Not only was there no discernible “single” on the entire thing, it sounded like crap. Sending it back to Thom was not well received. Ultra Kyu (Charles Grey) had to go up to the Yurt in Santa Cruz and oversee the remix! The next thing I know Ultra Kyu comes back and quits the band, we were stunned.

Now what? This part is hazy for me but I remember having a couple of intense band meetings with management / Goldenvoice and deciding to go back into the studio. After quickly rustling up a few songs, off we went with our friend and pre production producer Cameron Web at the helm. Wow, talk about a complete change of vibe. These sessions are where “Lovers of Loving Love”, “Anti Matter” and “Amino Man” were conceived. “Amino Man” was written by Dexter Holland of the famed Offspring. We were weary at first to record it but we wanted to please Paul T and Goldenvoice. I remember it was titled “A Mean Old Man” but Bat Commander thought it was too on the nose so he wrote Amino Man. Um ok…

By this time it was time to go back out on tour and promote our new masterpiece. Two years earlier with the Fury, we had crazy promotion and somewhat of a radio hit so I envisioned the same tour promotion / radio support overall. Wrong, turns out when you spend a bunch of money on something the record company doesn't believe in they're not going to sink any more into it. Also at this time Goldenvioce was developing the first Coachella music festival so they were strapped as well. I recall being on that tour and talking with the kids, most didn't even know we had a new record out. By the end of the run we were dropped from Goldenvoice and had to come home with our tails between our little Bat legs. I have no hard feelings about anybody or anyone involved during that process, im just telling my story and how it all went down. The things I like to remember about that time are the crazy adventures we had and all the stupid stuff we did as brothers. As crazy and irresponsible as it was to make that record, I am very proud of it. Songs like “Chemical Bomb”, “Lovers of Loving Love” and “Hello Good Night” are some of my favorite tunes. Our band has always been a very tight nit group and we love each other very much. I would do anything for each and every one of those dudes.

All releases are limited to less than 500 copies.

If you like No Singles: A 20 year Anniversary tribute to The Aquabats vs. The Floating Eye of Death, you may also like:

Bandcamp Daily  your guide to the world of Bandcamp

Frayle's Gwyn Strang and Sean Bilovecky join the show to talk about their cathartic new album.